Hey!
Due to the picture we can realize that propyl is a functional group that It’s terminal carbon atom doesn’t have an hydrogen atom so as to be able to bind to the other atoms; and also isopropyl is a functional group that the middle carbon atom doesn’t have one hydrogen atom. So I thought that tert butyl is a group which has an empty hand for the connection. But in it’s formula the carbon atom has reached the octet electron configuration…why? 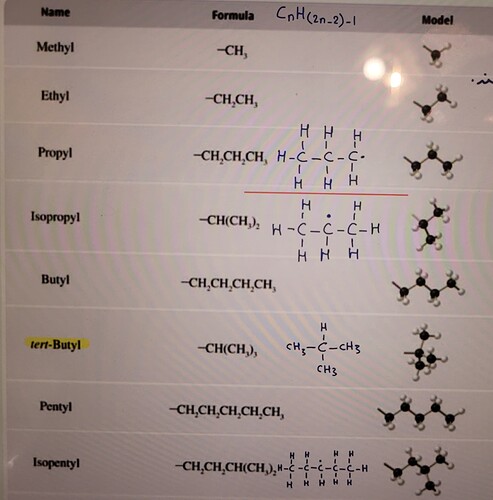 @Walina thank you Walina!
But in it’s formlua it’s written : CH(Ch3)3
If we want to write it’s lewis structure the alpha carbon is binded to 3 methyl groups and one hydrogen atom. So the formula which is written is wrong.
Owing to your description it should have been -C(CH3)3.
Right?

Yes the formula is wrong. It should be C(Ch3) 3. And this formula is not right because valency of carbon is 4.So there should be three methyl groups and one R group or any other new group.