If a glucose molecule became incorporated as a non­-terminal component of starch, which two regions, labelled i to v, would be involved in forming glycosidic bonds? 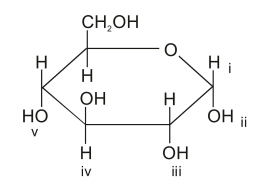 A Glycosidic bond is a permanent covalent bond that forms between a sugar molecule, i.e., carbohydrate, to another functional group or a molecule. In this question, we discuss the glycosidic bond between two glucose molecules. Both molecules have the same molecular structure as in the diagram given in the question. Glycosidic bonds are covalent bonds, which makes them permanent.
The bonds form via the process of condensation between an alcohol group -OH or amine group \ce{R-NH2} to the anomeric carbon. As a result, a -O- or -N- bridge between the molecules is formed. When multiple glucose molecules condense to form starch, they are created via α 1-4 or α 1-6 glycosidic bonds. The numbers denote which carbon’s -OH is forming a -O- bridge with its near glucose molecule. The -O- that formed is what was left from one of the -OH groups that went through the glycosidic bond. One will donate hydrogen, leaving the oxygen behind to form the bridge, while the other will be removed entirely from the glucose molecule.
Together with the lone hydrogen, we form \ce{-OH + H->H2O}. To conclude, we must find two anomeric carbons with a hydroxyl group of the same distance, α 1-4 or α 1-6. Looking at the question, we can see that the answer must be E as both -OH point in the same direction and the proper distance.