In a set of genetic crosses the offspring produced showed the same phenotype ratio of 9:3:3:1.

Which of the following statements could be true?

The answer to this question is A, all statements, 1-4, are true.

Let us then analyze why each of the numbers correctly describe a dihybrid cross.

"Two genes each with two alleles were studied."

"All parents were heterozygous." 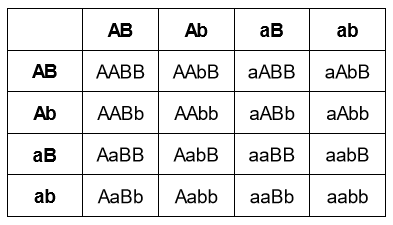 Thus, the answer to this question is A, where all statements correctly describe the dihybrid cross.