The diagram below shows a phospholipid. 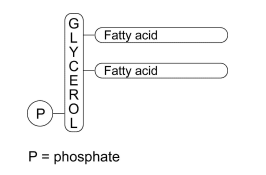 When this molecule is broken into a phosphate, glycerol and two fatty acids, the number of water molecules released is:

The answer to this question is choice C, zero (0) water molecules are released.

This is a straightforward question, but a tricky one if you are not aware of the structure of phospholipds and their synthesis. It is important to note that the bonds that connect fatty acids to the glycerol backbone are ester bonds, while the bonds that bind phosphate to the glycerol are phosphodiester bonds. The process of esterification to bind free fatty acids and phosphate to glycerol actually releases water. Thus, to simplify, water is released when phospholipids are formed, and NOT when they are broken down. In this question, it is asking you how many water molecules are released when phospholipids are broken down, which is a trick question, since water is released when it is formed.