Which of the following processes take place during the establishment of a resting potential in the axon of a healthy human neuron?

The correct answer is A.

First things first, let’s review what neurons are and their structure.

A neuron is a cell that can be excited by electricity. Based on the neuron’s function, we can identify 2 types :

A neuron is made up of the following components :

Now, what is an action and resting potential ? 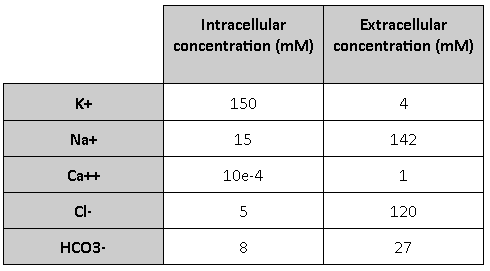 An action potential is the inversion of the polarity of the cell membrane. It can be divided into different phases :

To get back to the resting state, the ions move in the opposite direction and therefore need different types of transport mechanisms :

Both of these elements are key factors that ensure the establishment of the resting state.

On another note, cell respiration refers to the different metabolic reactions that leads to the formation of ATP (adenosine triphosphate), an energetic molecule. The ATP made by the mitochondria diffuses inside the neurons to maintain adequate energy levels for synaptic transmission.

Therefore, cell respiration is also found during the establishment of a resting potential.