The diagram represents the fluid mosaic model of a cell membrane. 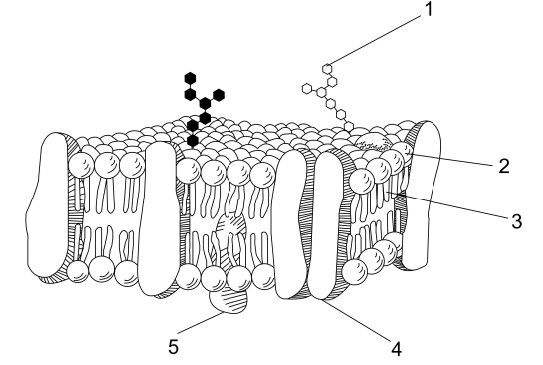 Which one of the labels 1-5 shows a hydrophobic region of a molecule?

The correct answer is D.

If you take its literal definition, it means “repelled by water” ; however, the reality of things are slightly different : structures are hydrophobic because they can’t form hydrogen bonds with water.

That is the case for non-polar molecules. They have no polarity because all of its electrons are evenly spread.

Now onto the diagram.

Just like we see in the diagram, cell membranes are made of different elements. Let’s review all of them, one by one : 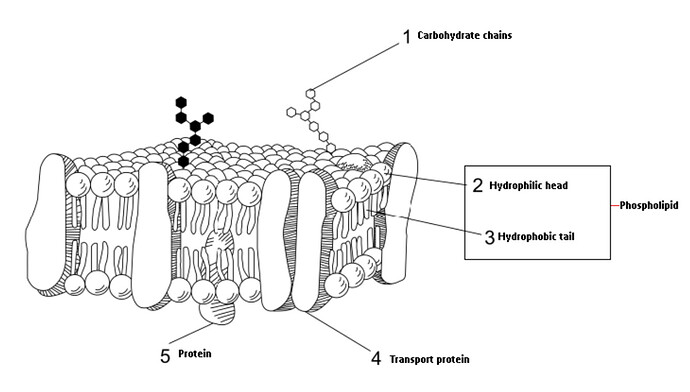 Number 1 refers to carbohydrate chains that are on bilayer membranes.

They are glycolipids and glycoproteins.

They ensure the integrity of the structure and play a key role in cell recognition and, therefore, in the immune response.

Carbohydrates are polar due to the difference of electronegativity in the C-O bonds ; therefore, it is not hydrophobic.

Number 4 and 5 refer to proteins.

Like the name suggests, they are made of proteins, and therefore, of amino-acids.

They are organic compounds that are composed of 2 distinct groups : one is invariant, and the other one, called the R-group, is specific to each amino acid.

The invariant group, common to all amino acids, is made of 2 functional groups :

Therefore, they are polar molecules.

Number 2 and 3 refer to the extremities of a phospholipid

A phospholipid is made of 2 different regions :