Which one of the following diagrams has a correct description for a cell from an organism with a haploid number of 4?

[Assume that the sex of the organism is inherited in the same way as in humans.] 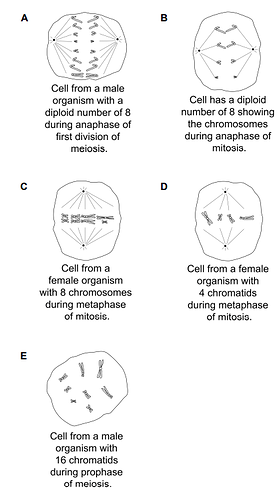 The correct answer is E.

Chromatin is the general packaging of DNA around histone proteins – this DNA arrangement helps condense DNA to fit within the cell’s nucleus. Throughout most of the cell cycle, DNA is packaged in the form of chromatin. However, chromatin exists in an additional level of an organization known as a chromosome during mitosis and meiosis.

Chromosomes are an even denser chromatin packaging visible with a light microscope, particularly during metaphase. Chromosomes can exist in duplicated or unduplicated states. At the beginning of mitosis, for example, a chromosome consists of two sister chromatids – chromatids are used to describe the chromosome in its duplicated form.

Here is a simple table to show you the number of chromosomes and chromatids during each phase of mitosis and meiosis : 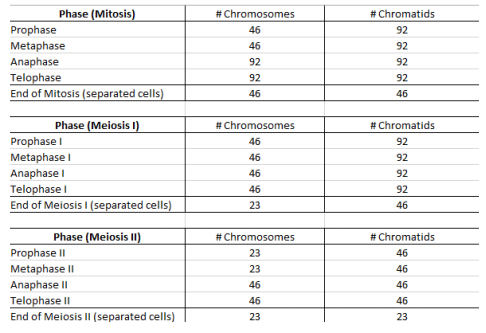 A diploid cell has 2 complete sets of chromosomes, usually written as being a 2n cell, as opposed to a haploid cell, that only has 1 set of each chromosome, and written as a n cell.

All of these cells are undergoing a process of cell division (either mitosis or meiosis). Both of these processes are precedented by a replication of DNA, which means that there would be 16 chromatides.

From that only, we can determine that E is the answer.